USA’s newest show lets us indulge in the vigilante justice fantasies born of every story that tries to delve into the underworld of computer hacking — so, how did it do in it’s pilot episode (debuting June 24). All in all, the show …felt like other shows? Not necessarily in a bad way, but things felt familiar, like deja-vu. The first things that come to mind are the staples, of The Matrix and David Fincher’s The Social Network — a bit on the nose, I know, considering it’s a show about a computer hacker. Still, the influence is there, from the filming and coloring choices of every scene to the old go to long suffering hacker forced to live in corporate America. But, Mr. Robot echoed other types of shows as well. There was definitely a Dexter vibe, without the dark comedy that made that show so unique. And, to further the Fincher influence, a plot straight out of Fight Club drove the storyline for Rami Malek’s protagonist, Elliot. 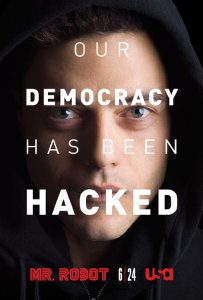 And what of Television’s newest techno-genius savant? It was a bit like anti-hero bingo — Dexter’s dark inner monologue, a criminal double life, personality disorder, classic Dr. House’ addiction-not-a-problem view on drugs, a Sherlockian way of reading people, and even scenes at a therapist’s office like good old Tony Soprano — but hey,they are tropes for a reason.  They work, and people still enjoy them. Yes, Elliot is an Outsider looking in, a deep running disdain for society, or at least for the things they buy, all the while wishing he could save humanity from their servitude to the whims of the 1% — it could get a little heavy at times. Yes, another young cynic with a martyr complex. But, there was still something rootable about Elliot. Maybe it’s the fact that unlike most of our TV anti-heroes, Elliot is still pretty young. There’s something viable and threatening about his cynicism — he just might be able to act on it, instead of just complain about the world. Or, maybe it’s just Malek’s portrayal that kept me intrigued instead of yawning. He’s strong, and looks bursting at times with potential to be more to take Elliot beyond the guy who is smarter than everyone else and writes really angry posts about the world in Reddit comments. As most of the time we experience Elliot through aforementioned inner monologue, the show shined most when he was allowed to actually act. On screen. With other people. There’s a vulnerability that comes through when we see a person with ideals and connections he wishes he could make, and not just an anarchist poster-boy. With anti-heroes, you have to want to like them, even if they’re not always likable. And, with Elliot, that seems more than possible, and it bodes well for the series.

Plus, there’s something fun about listening to a person rattle off all the things you wish you could say about how screwed up the world is. That never gets old. Paging Dr. House.

Portia Doubleday plays Angela, our leading lady, and I like her, even if I’m not convinced of her character just yet. There are the markings of a good female character there, and interestingly enough, unlike most female characters that we only get to relate to via their male counterparts, instead of having a sunny, quirky personality, we get to know her Angela through things she doesn’t like. Angela doesn’t like Ellliot’s wishy-washiness. She doesn’t like how he treats her boyfriend. She doesn’t like when Elliot comes to her rescue during an embarrassing moment. It’s nice to see a female character who may or may not be the object of affection of our male lead not come off as a pure put-on-a-pedestal ray of sunshine. Their relationship is interesting, with a lot of backstory to root through, I suspect. These two are supposed to be old friends, but considering how tense they are at times, it’s hard to see how — unless that’s the point.  That’s the story of a lot of friendships that grew out of childhood. Adulthood comes along and makes them more difficult to maintain, leaving the only reason people still have a relationship being that they simply want it. It will be interesting to see if she’s given more to do, because Portia Doubleday seems the type that can handle it.

I would write about Christian Slater’s character, as he’s a big get for a freshman cable drama, and he will obviously be a big deal. I enjoyed one particular monologue quite a bit — it zigged when I thought it would zag, and that’s always nice. But, all and all, his character remained a mystery by the end of the pilot, and I think I’m going to hold off making any more judgments about him until more episodes come out.

The whole thing felt like Dexter meets Hacker Avengers, and it’s an interesting premise for a show — be a bit naughty to save the world from the capitalist crooks who are stealing from it.  I don’t know what the shelf life is, but if Mr. Robot can keep up the quality of the filming and flesh the characters out more beyond their stereotypical roles, it could be a hell of a ride. Especially if more lines like this are allowed:

“There he is. Terry Colby, the CTO. Even though he’s the head technology guy at one of the companies in the world, he owns a Blackberry.”

That’s dark humor, subtle and quiet, and if Mr. Robot allows itself to indulge just slightly more in that and less of bleak-dom, it could be a nice fill in for a lack of Breaking Bad and Dexter in our lives these days. Those shows were literally about homicidal murder and drug dealing, and yet allowed for laugh out loud moments to build charm and character. What’s the point of anarchy and the destruction of society’s limits if we don’t have a little fun along the way, right?

The pilot of Mr. Robot is online now, and debuts on USA Network June 24.