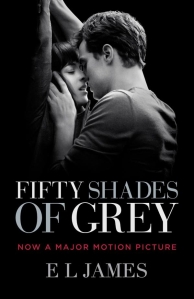 E.L. James’s latest cash grab comes out today. In honour of one woman rising to another tax bracket on the back of another person’s idea, I made myself some rum punch and finally watched the movie that bored audiences around the world. I have never read the books but I have read Jenny Trout’s amazing recaps. Which is better than reading the books because the recaps are actually entertaining. The movie had the potential to fall into so-bad-it’s-good territory but the movie withholds entertainment like Christian Grey withholds orgasms.

So what went wrong? Weirdly enough, too much went right. The director, Sam Taylor-Johnson, tried so hard to make a good movie but the source material held her down and the movie just ended up being not very good or very bad. There is a potential interesting movie that could have been made from the books about two fucked up people in an abusive relationship but the movie isn’t allowed to go there either. E.L. James maintained creative control over the project throughout the filming and she has been known to block people on twitter over the mere suggestion that the relationship she portrayed might be abusive. No, this is a romance story. A romance story where prince charming just happens to be a controlling, coercive, douche nozzle.

How to solve a problem like Christian Grey? The movie never figures out how to answer 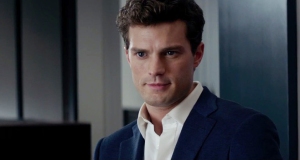 that question. They shaved down his roughest edges and left Jamie Dornan with nothing to work with. I really do not agree with the criticism that Dornan was phoning in his performance, he was just handcuffed to this non-character. They took away Christian’s temper and simmering rage and replaced it with nothing. They couldn’t turn him into a guy who actually has fun with his sex toys and billions of dollars because that’s not James’s vision. He also couldn’t look like he was always five seconds away from murdering the heroine because audiences aren’t going to root for that guy, so we are left with a boring guy who doesn’t do much of anything. The best scene for Dornan’s Christian is the contract negotiation scene. He’s having fun in this scene and Christian comes off as a guy who’s not into BDSM because of his damaged psyche but because it’s his kink which he enjoys. The scene is legitimately entertaining and hints at a better movie that could have existed if the director had been left alone to do her thing.

The one other scene that actually entertained me on purpose? Ana drunk calling Christian from the bathroom line at the bar. Dakota Johnson does this hilarious impression of 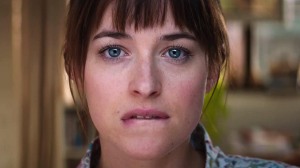 Christian and his hot and cold behavior. Poor Ana doesn’t seem to have any interests or much of a personality but Johnson infuses her with some life. Johnson’s Ana smiles, laughs, flirts and is playful with Christian. She seems to be enjoying exploring her sexuality but Christian is a bug-a-boo who won’t give her any space to think and keeps trying to take her from zero to one hundred. When he goes slowly with her she’s into it, when he acts like a controlling asshole she’s not. That Ana is such a weirdo.

There’s not really a plot to the movie. I guess that plot would be two one dimensional characters negotiate a sex contract, while having whatever kind of sex they want wherever they want, until Christian decides the contract doesn’t matter, but all the rules in the contract stand. Also a lot of scenes happen just because they happen in Twilight. Seriously, The bike rescue, the piano scenes, dinner with Christian’s family, Ana goes to visit her mother, all Twilight. At one point I was wondering why Christian was randomly pulling over to make a sleepy Ana walk through the woods, and then I remembered the “I know what you are” scene from Twilight. Hell, the helicopter and glider rides were probably a stand in for Bela riding around on Edward’s back while he ran really fast. Why is Christian the way he is? BECAUSE HE’S A VAMPIRE. The sex scenes were sprinkled throughout the movie to break up the monotony.

I was watching the unrated version but the sex scenes seemed pretty tame to me. Lots of switching to long shots and quick cutaways. Besides extended shots of breasts and butts it’s not too far off from what I’ve seen on any soap opera. There was no appearance of little Christian which is a shame since it’s Christian’s favourite thing. “I want you to become well acquainted, on first name terms if you will, with my favorite and most cherished part of my body. I’m very attached to this” (Fifty Shades of Grey p. 100). The sex scenes themselves started to get repetitive. Christian ties up Ana, he teases her a bit, he removes her panties last, quick shot of Ana moaning, the end.

After dragging on for two hours the movie finally reaches it’s anti-climax. After establishing that Christian is only into this BDSM thing because he’s “fifty shades of fucked up” Ana tells him to give her his worst. Christian half heartily hits her 6 times with a belt (I guess they thought whipping her as hard as he could with the buckle side of the belt until she’s crying so hard she has snot coming out of her nose would turn people off) Ana goes to have a cry and then she leaves him. As Ana gets in the elevator Christian comes at her like he’s going to make-out with her, and she says “stop, no!” Apparently one of the largest battles between James and Taylor-Johnson was over what word Ana should say. Taylor-Johnson wanted her to say “red” which is their safe word. A few scenes back, during their last time having sex, Christian reminded Ana about the safe words. Yellow for things are getting uncomfortable, and red for stop it right now. Red would have been a much stronger choice for Ana’s last word. It wouldn’t have saved the movie or anything but it would have worked better.

After the elevator doors close and the movie fades to black, it faded back in. On the unrated version there is this really terrible musical montage tacked on. Intercut between Ana, broken down crying in full New Moon mode, and Christian, running and doing business, we get flashbacks of their “great” relationship. After the montage Christian gets up and leaves a business meeting and it’s clear that he’s going to get his girl back, and then finally the movie fades to black for real. I’m guessing it was James’s idea to add that on after people complained about the original ending because the montage sucked. With the loss of Sam Taylor-Johnson and E.L. James having even more control of the sequel Fifty Shades Darker is shaping up to be the train wreck we deserve.

Highlights from my tipsy notes:

The Grey building is really tall, Ana is impressed, metaphor!

Ha Ana falls through the door like a dumb ass.

Now she’s biting on the Grey pencil she took from the office, metaphor!

“Anastasia have you been drinking?” Yes dad GOD!

“Eat me, drink me,” Fuck you Christian this isn’t Alice in Wonderland

“You’re here because I’m incapable of leaving you alone.” I’m seriously getting the feeling that Christian is a vampire.

“Laters baby.” UGH drink. Like it’s not even their catchphrase, they stole it from Elliot and Kate.

Seriously this guy is a vampire or an actual serial killer. At least the soundtrack is fun.

More politics than The Phantom Menace.

At least he didn’t finger bang her at his parents’ dinner table.

It’s over I made it.