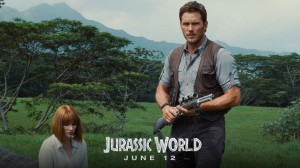 A rather quiet weekend all and all, perhaps because everyone and their mama, and their mama’s friends were at the theater seeing Jurassic World, which made over half a billion dollars over the weekend worldwide.  That’s… a record.

Could Tom Holland be the next Spider-Man? The actor is not only reported to be in the final four names tossed around with Marvel and Sony, but he was also in Atlanta this weekend. AKA — the city where Captain America 3 is filming. Coincidence?

Sharknado 3 has a teaser trailer.

E3, the massive gaming convention, has kicks off this week.  Look for lots of big gaming news.